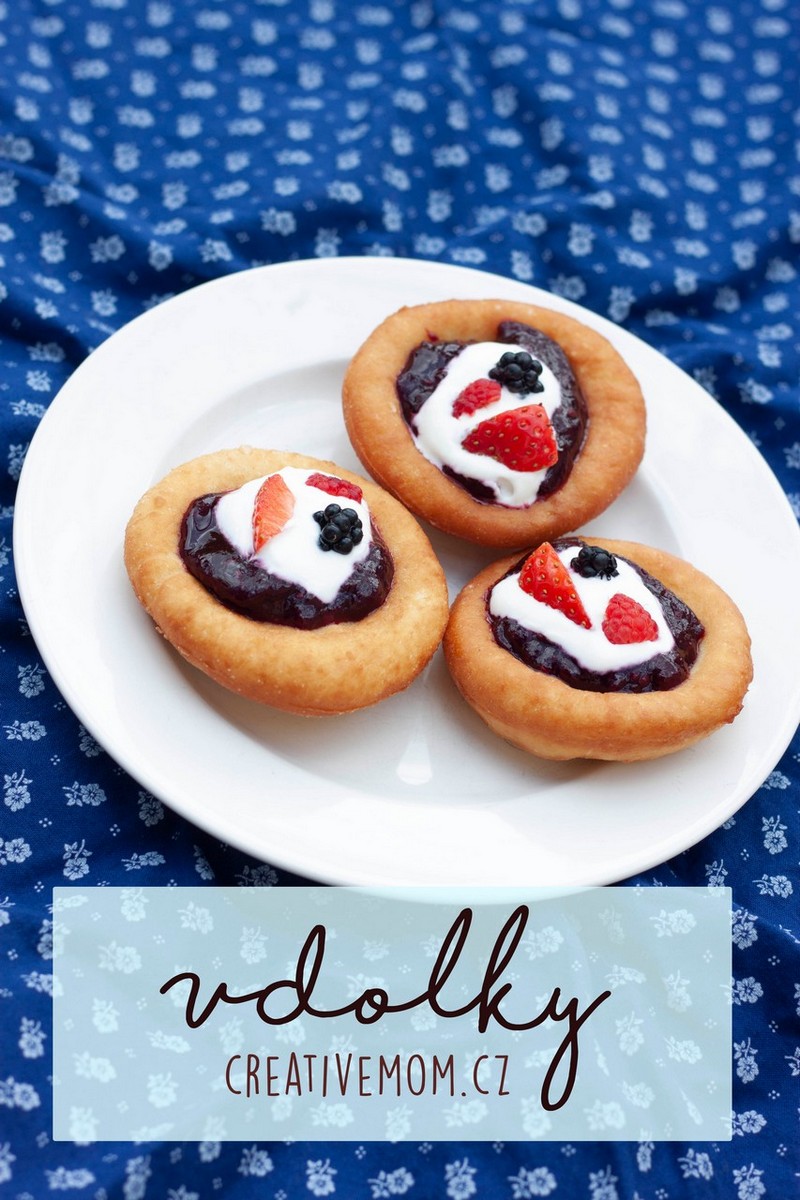 Vdolky are a traditional Czech (and also south-German) dessert that is traditionally served during the festivities Hody and Masopust. They look similar to koláče which are baked. Vdolky are made from yeast dough which is fried either in the form of a pancake with a dimple or as a fluffy doughnut. In both cases with sweet topping. 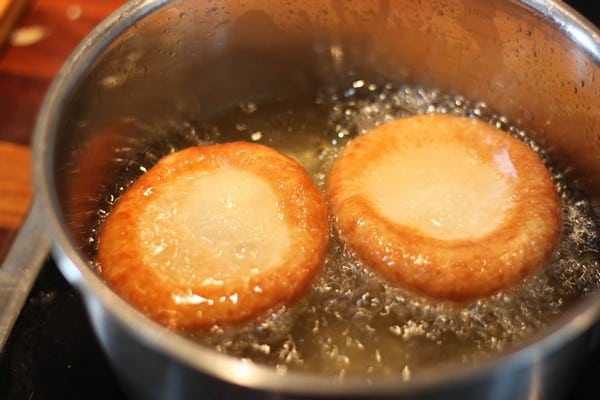 In some regions they are served rather with cream or povidla (thick plum marmalade) in other they are sprinkled with grated gingerbread. 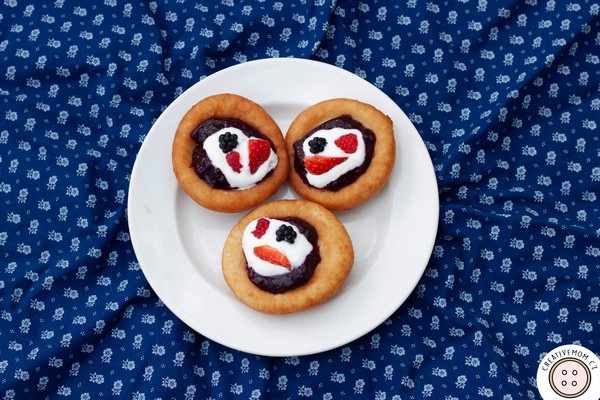 Although nowadays we know them mostly as a dessert, they used to be baked also savory (sometimes with caraway seeds) as a side dish to meat.

I have always eaten them smeared with marmalade and if I want to pretty them up, I put a generous load of marmalade in the dimple, then a teaspoon of sour cream and some forest fruit for decoration. 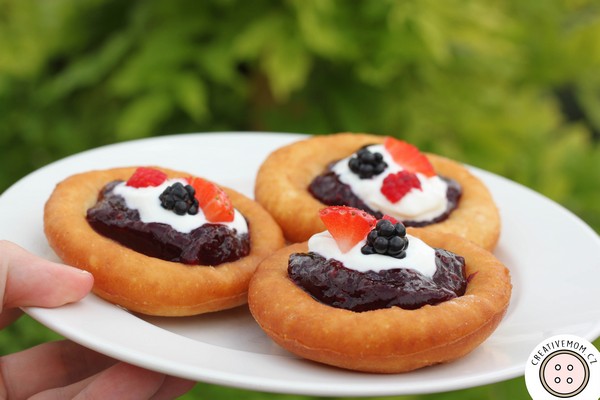 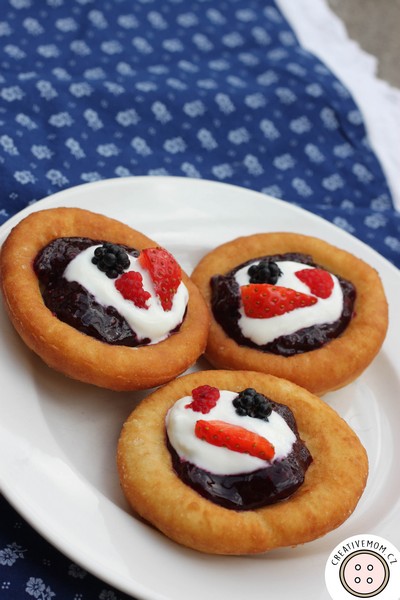 If you want to be really authentic, you should use half of the amount of finely ground flour and half medium-coarse. There’s a large variety of flours in the Czech Republic and to get the recipes authentic you should always use the right flour – here’s the Czech Flour Guide. However, it’s not a problem if you use just your usual all-purpose flour, the result will be delicious anyway. 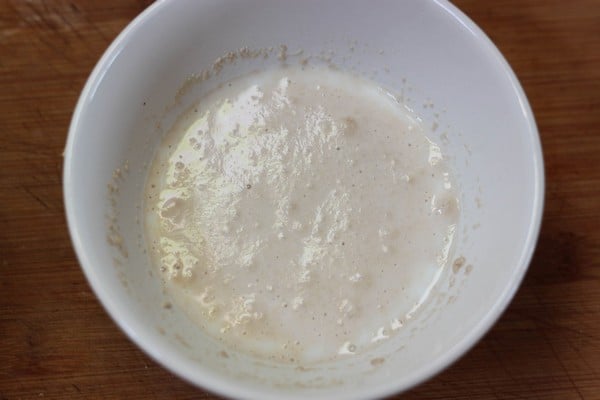 To make the starter, pour the milk into a smaller bowl and heat it up slightly, it should be lukewarm. Sprinkle the yeast into it and also a teaspoon of sugar. Cover with a kitchen rug and let it work for 10 minutes. You will notice small bubbles on the surface. 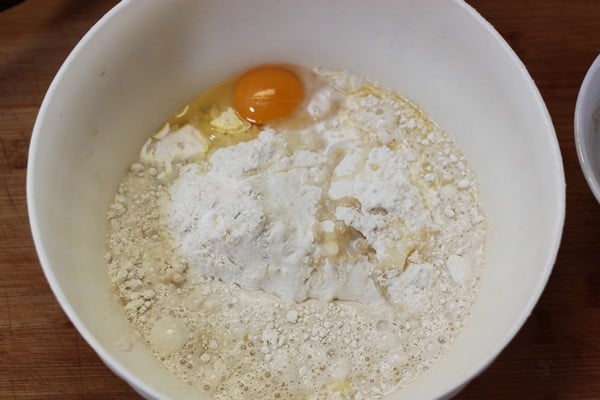 Put all the remaining ingredients in a large bowl and then add the starter. 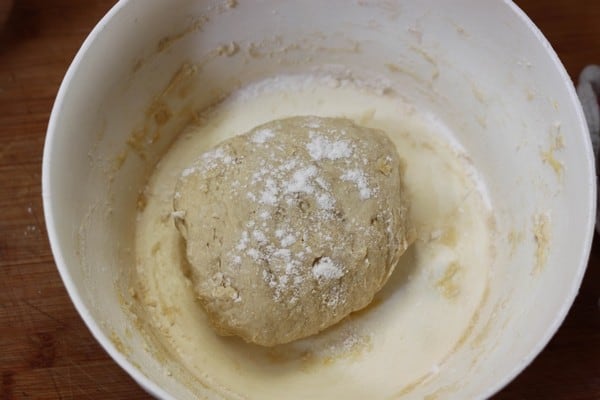 Knead until you get smooth dough (I always use my hands at the end), powder with some flour, cover with a rug and let it stand in a warm place. 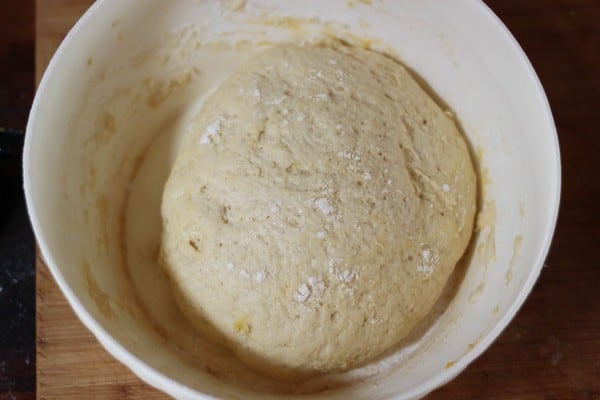 The dough will double at least, it might take one hour or more. 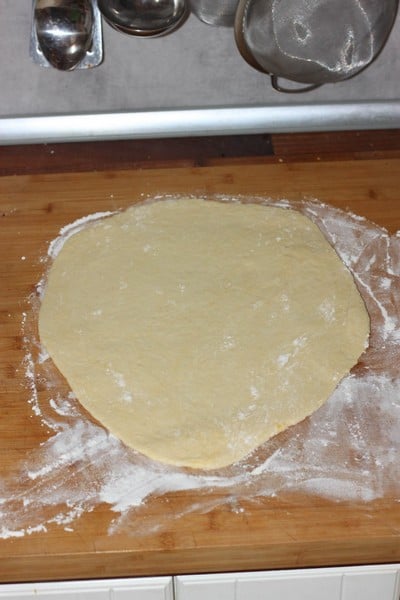 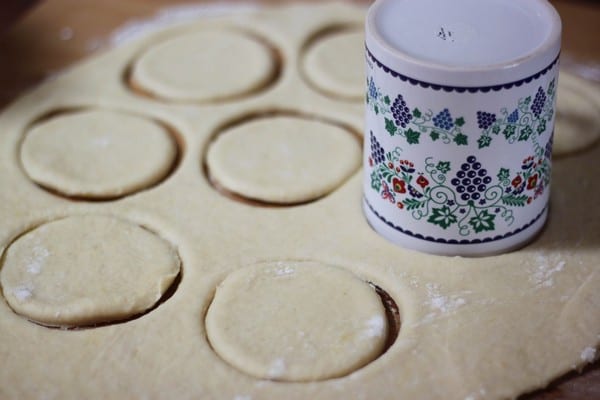 Using a cup cut out as many circles as you can. Roll out the dough leftovers and cut out more circles. 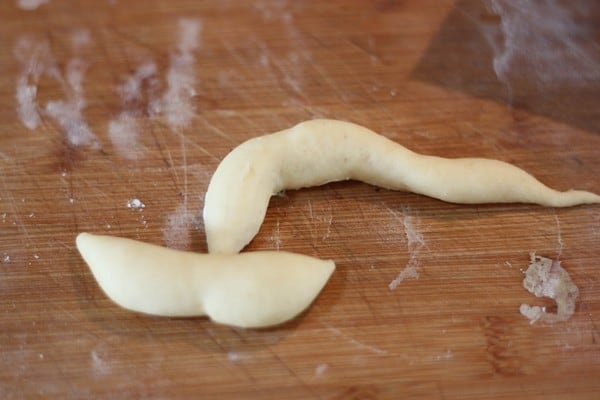 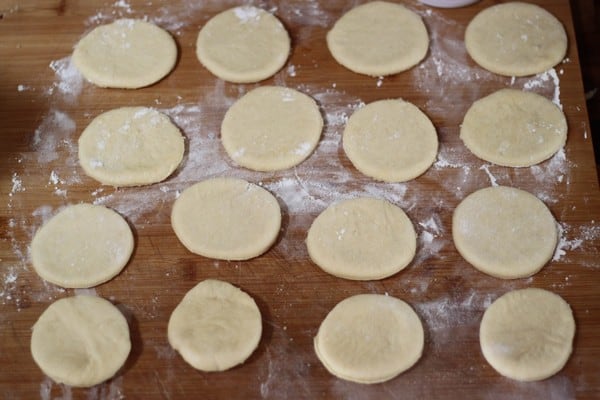 Cover the circles with a rug and let them grow for another 20 minutes. 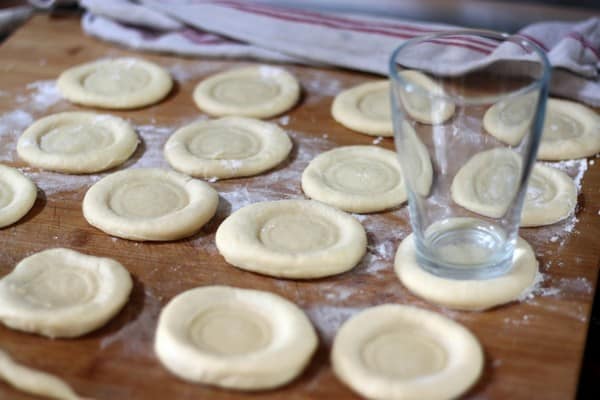 Then use a small glass to press a dimple in each circle. You can also make dimples with your hand.

Pour some oil into a pot, it should be enough to make sure the vdolky don’t touch the bottom of the pot. Heat up the oil to fry instantly but don’t burn it. 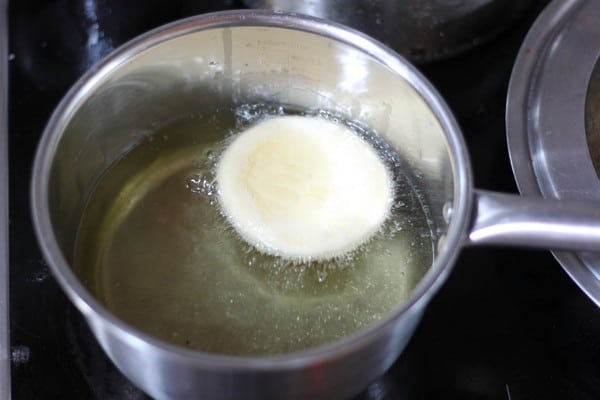 Place the vdolky in the hot oil first dimple down and fry them like that until the edges turn golden. It’s a question of seconds so don’t walk away from the stove. 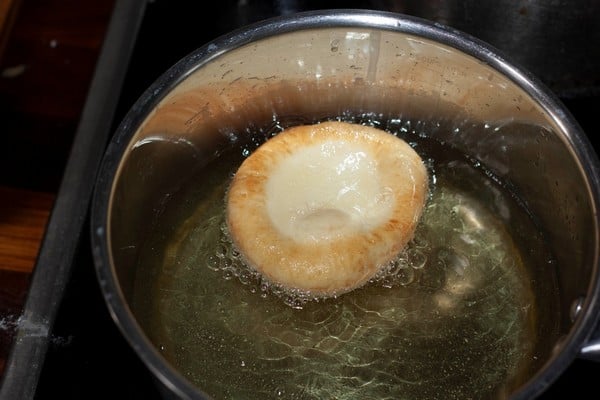 When the edges are golden, turn the piece around. 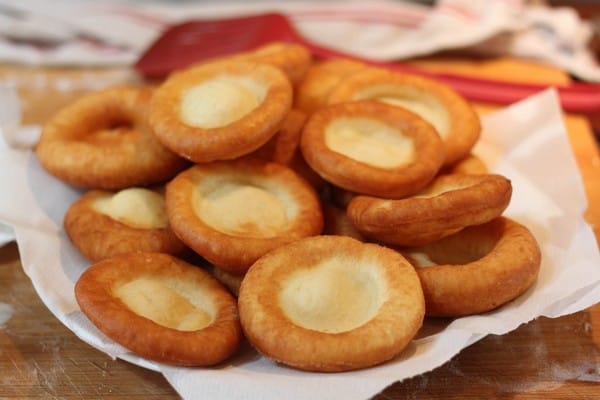 Place them on a plate with a paper towel to soak in the oil. 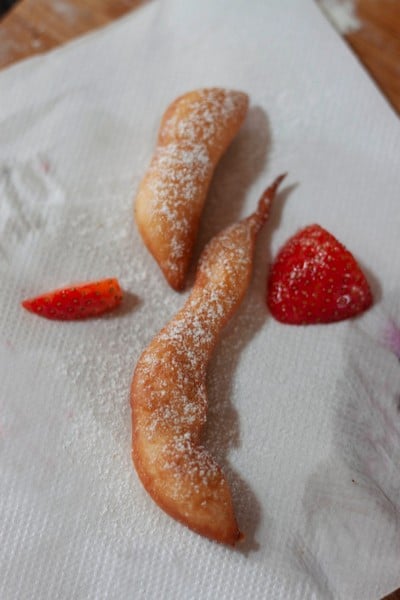 Fry also the dough leftovers and eat them sprinkled with powder sugar. When I was little me and my mom used to play a game in which we guessed which animal the fried pieces resembled. 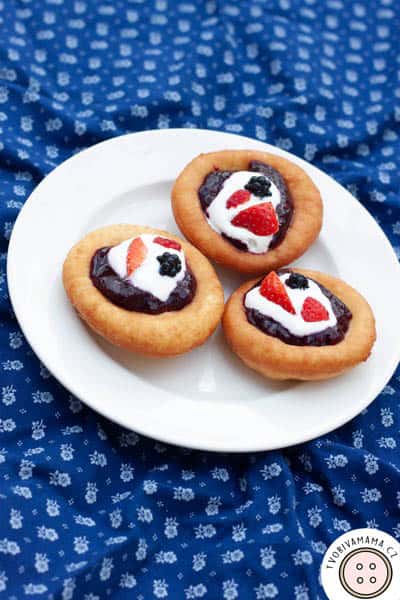 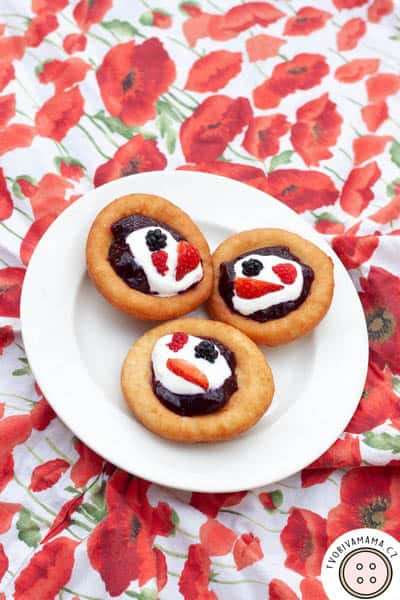 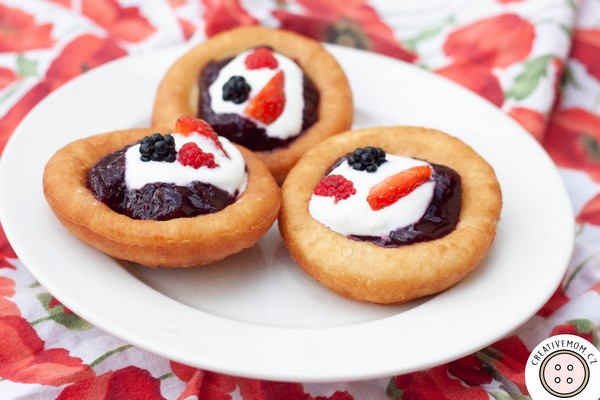 You can eat them with marmalade, sprinkled with sugar. Or just like here – put a tablespoon of marmalade in the dimple, a teaspoon of sour cream on the marmalade and some fruit on the top. 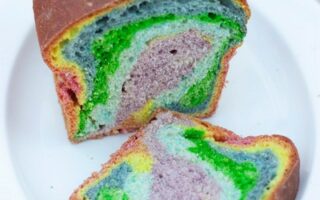 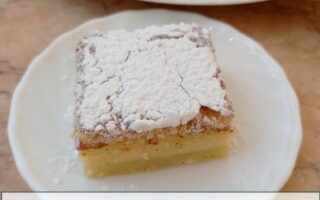 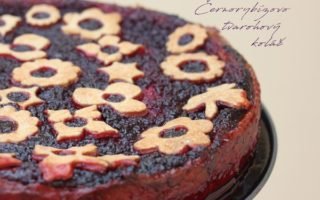