Have you ever had a tea bomb? It’s the most original way to serve tea. And here’s a tutorial so you can make tea bombs at home. 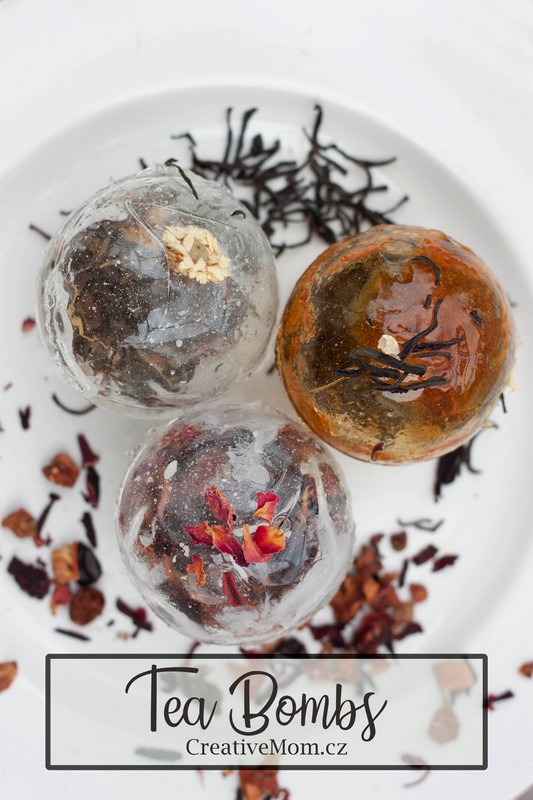 What are Tea Bombs

Tea Bombs are translucent balls filled with tea. You just throw them in a cup with water, the bomb melts and releases the tea leaves.

Maybe you remember my Chocolate Planet Earth, the process is very similar.

You can enjoy these sweet bombs by yourself, at a tea party with friends or to give them as a present and they make for a beautiful present! In this case, I recommend placing them in a muffin paper cup.

As I said, the tea bombs are sweet. You can make them either from isomalt or from a mixture of honey and sugar. I’m going to tell you something about them before we start (and I’ll show you how to make them from both of these). 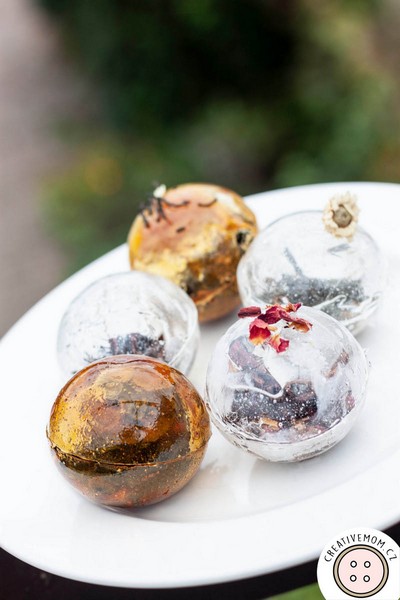 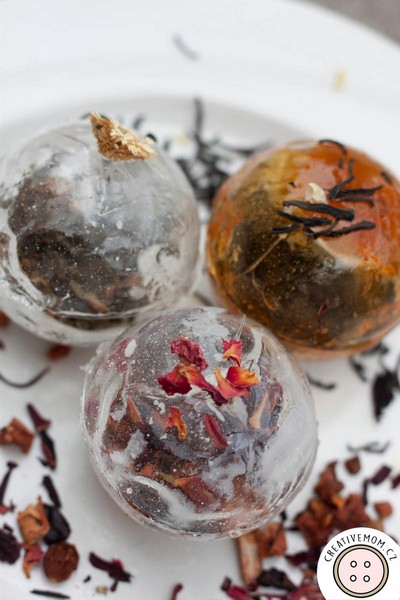 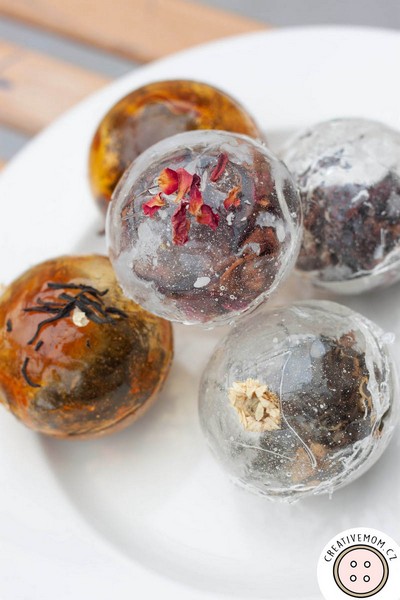 Isomalt is a sugar substitute used to make sweet decorations. It has a very small impact you the glucose level in blood, that’s why it’s often used as sweetener in food for people who suffer from diabetes. It doesn’t promote tooth decay and has the half of the calories of sugar. Just like other artificial sweeteners, isomalt can cause intestinal distress when consumed in larger than recommended doses. Generally, it’s said that the daily consumption is 50 g for adults and 25 g for children but this can be very individual and you mustn’t take these values as something granted for everyone.

I like the isomalt bombs because they’re clear and the tea leaves are well visible. 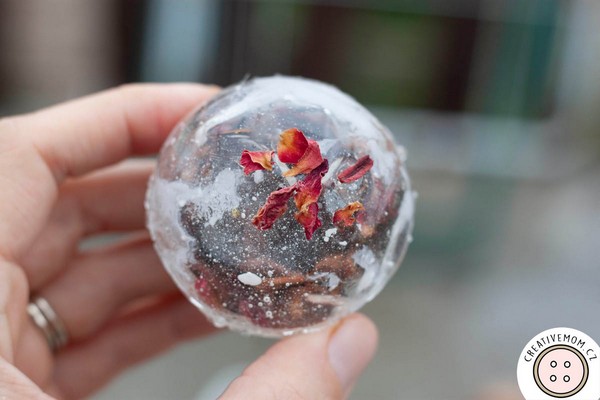 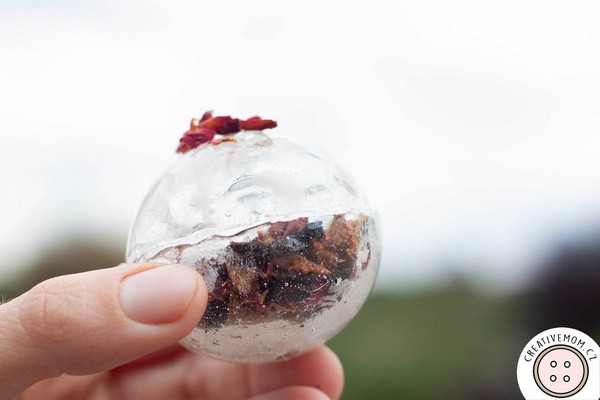 Tea Bombs from Honey and Sugar

The bombs made from these ingredients have golden color and the tea leaves aren’t as clearly visible, however, these bombs are so beautiful! They have more calories than the isomalt bombs and they raise your glucose values. If you like honey though, you’ll love these bombs. 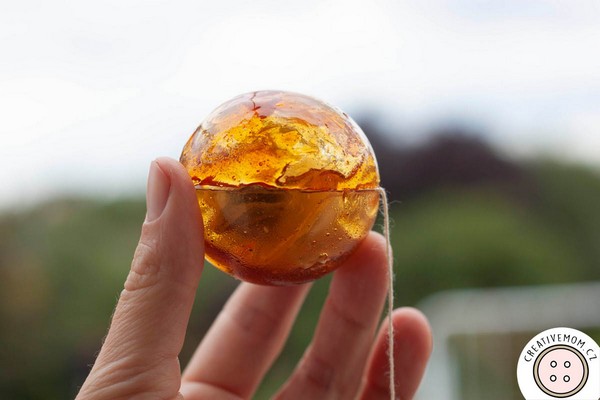 What if I don’t want the tea leaves floating in my cup?

Some people are used to drinking tea with the leaves in it. If you’re not one of them, you can still have the tea bombs. First, you can place a teabag inside instead of just the leaves (see the photos) and second, you can throw the bomb into a French press or other gizmo with a sieve. 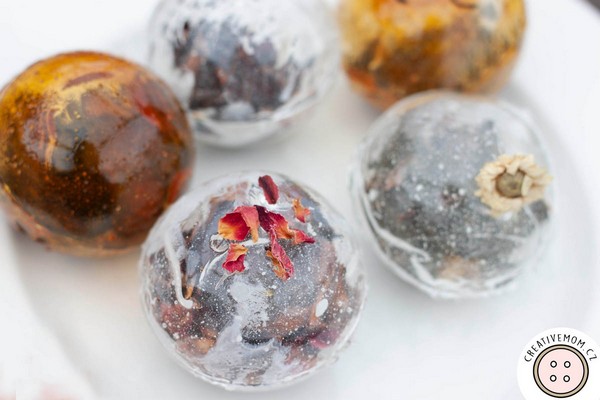 For the isomalt version

How to make Tea Bombs 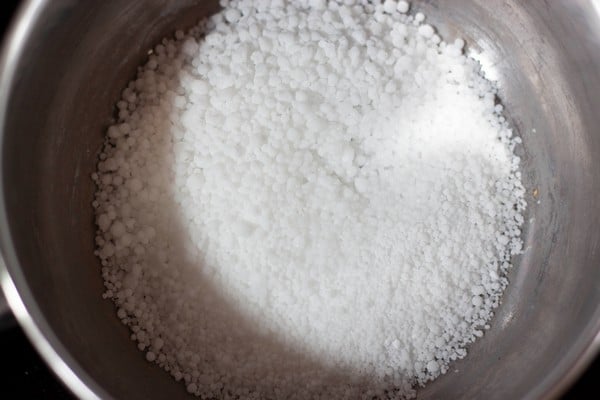 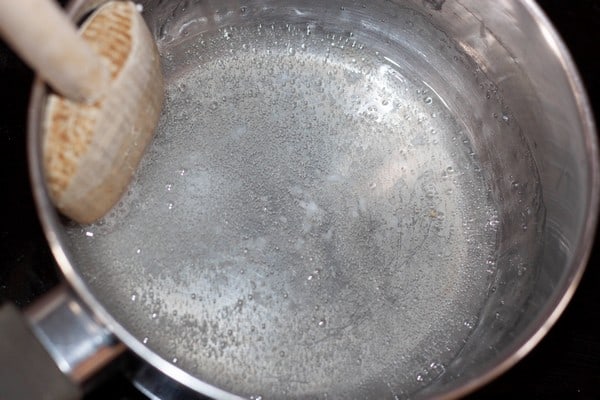 If you use isomalt, place it in a pot together with the water and stir over medium heat. It will take a while but eventually, the mixture will be liquid and clear without any undissolved crystals. 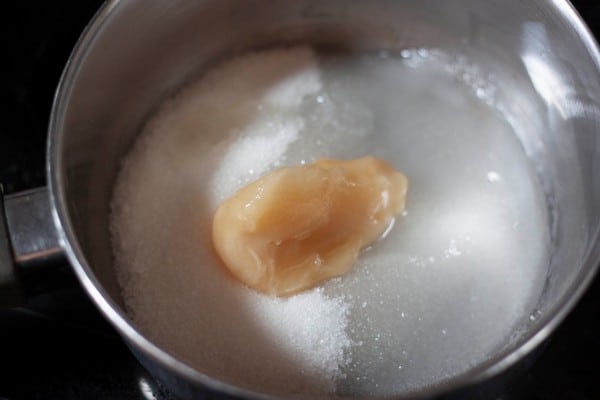 The process for honey and sugar is very similar – place these and the water in a pot and stir over low heat. At first, it will bubble, then it will get golden. At this point you can take it off the stove. 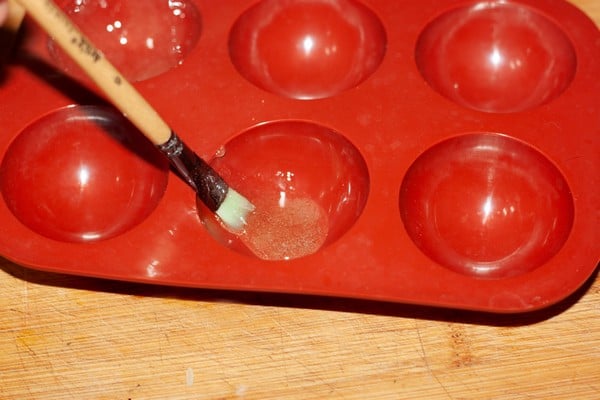 Brush the half-sphere molds with the mixture and let it dry. I apply at least 2 layers. Both mixtures become solid fast but still the mixture tends to fall down to the center, so try to avoid this so that the layer is even. 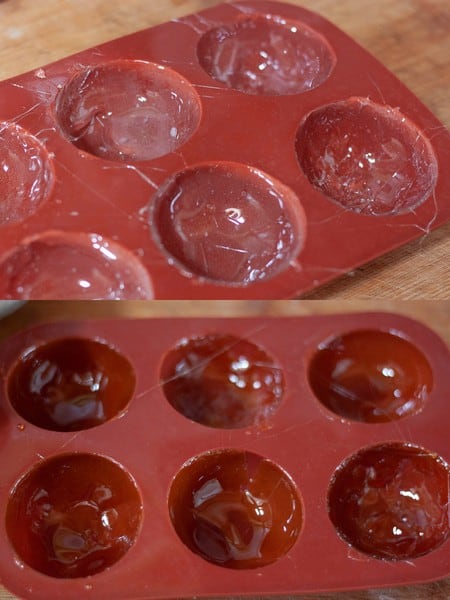 When the mixture is cool, place it in the fridge for a few minutes.

Pop out the half spheres carefully. 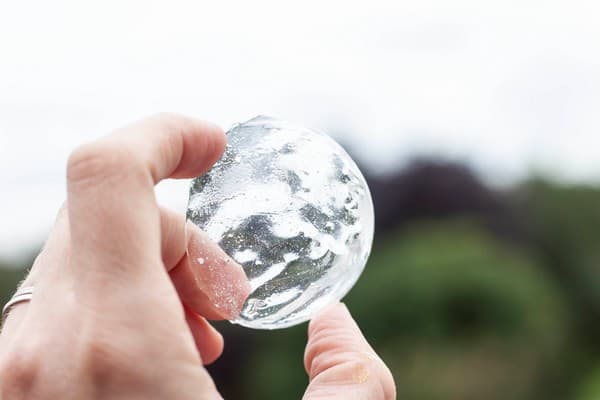 They should be translucent. 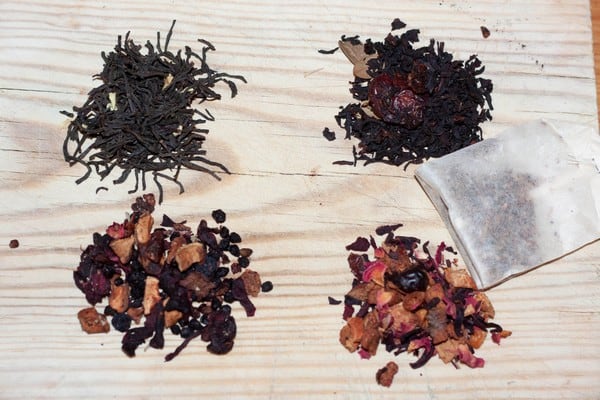 Prepare the tea – leaves or in a bag. 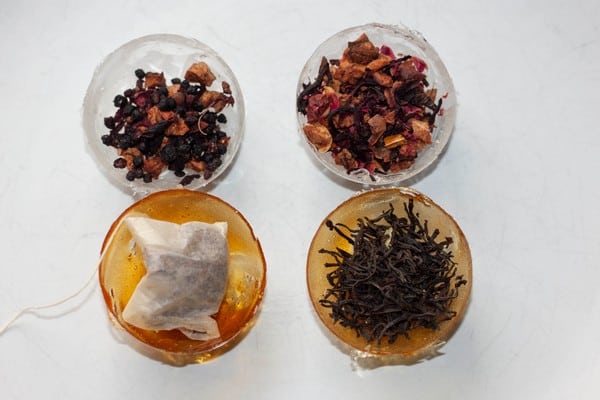 Fill half of the half spheres with tea. If you want to use a tea bag, just leave the thread hang outside of the sphere. 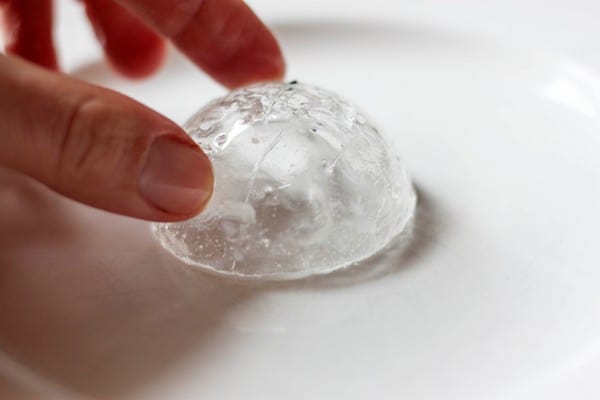 Heat up a place (in a microwave) and place a half-sphere on it for a couple of seconds (sphere up). 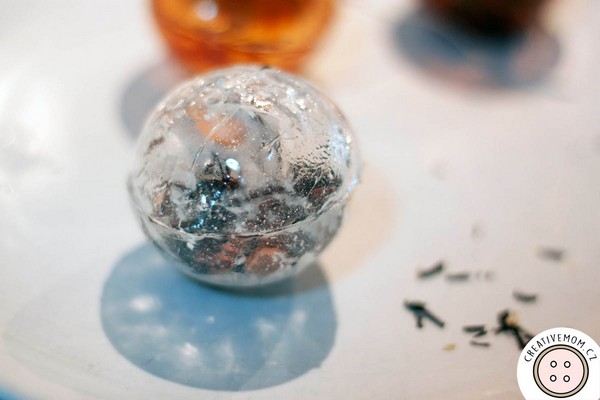 The edges will start melting fast and then you have to act fast. Place it on one of the half-spheres with tea. The melted edges will solidify fast and seal the tea inside the bomb. 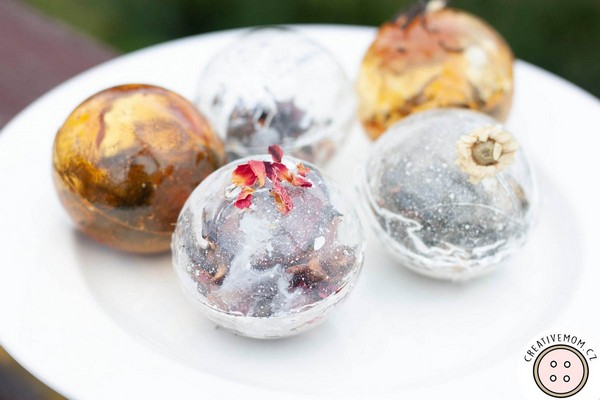 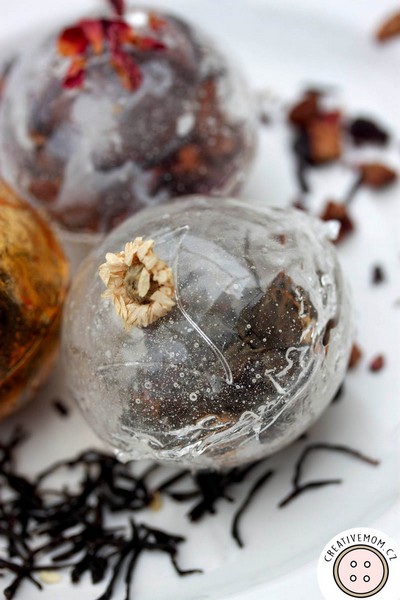 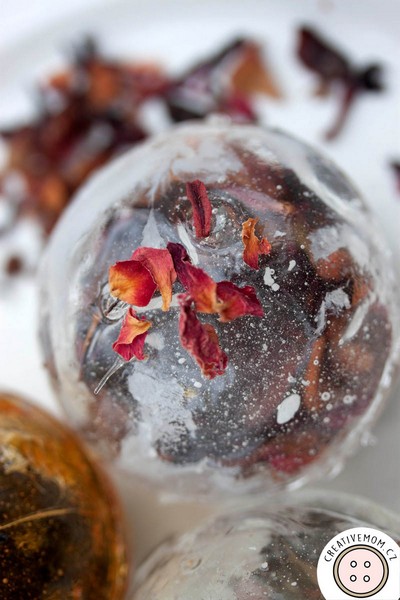 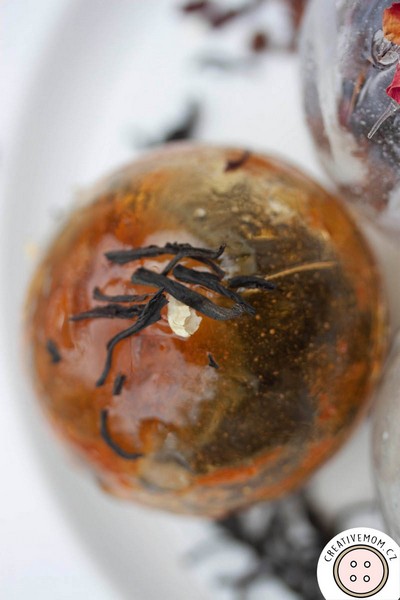 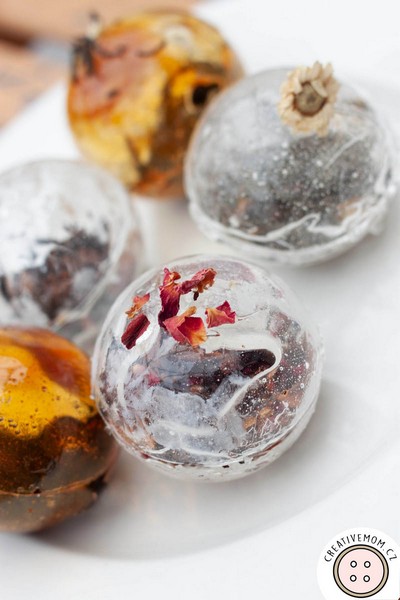 If you want to decorate the tea bombs, melt some more mixture (it’s enough the use the leftovers from the pot). Put a few drops of the mixture on the top of the bomb and sprinkle with tea or any other decoration. You can serve the bombs immediatelly. 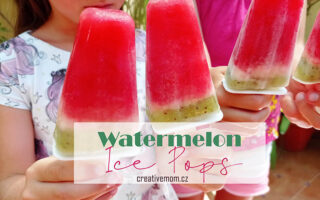 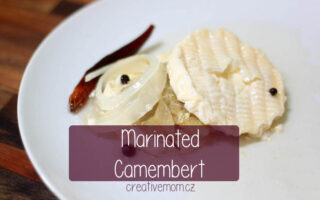 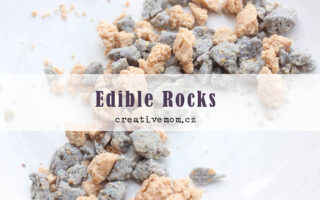