Miniature in a Walnut inspired by the legendary story of Heidi. 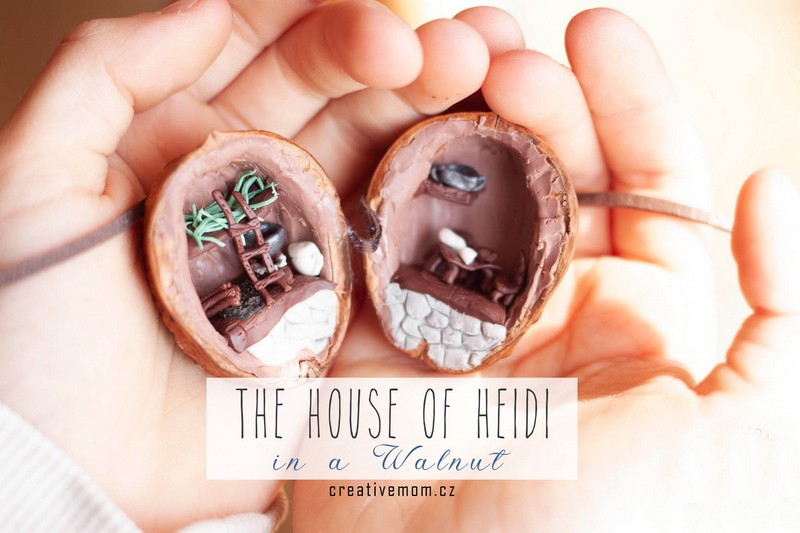 I love the story of Heidi by Johanna Spiry. Even if you haven’t read the book you probably saw one of the movies or series. In this case exceptionally, I was amazed even more by a movie adaptation, specifically the 2015 movie Heidi with Anuk Steffen. So I wanted to recreate the house in which Großvater (Grandfather) and Heidi lived. I made part of their modest house as a miniature in a walnut and I will take you step by step through the process. 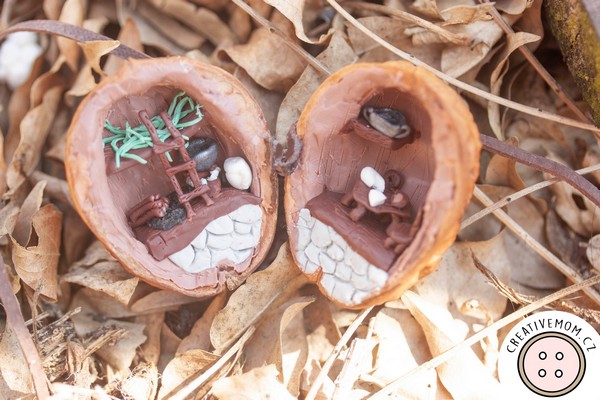 I have also made this miniature Pantry in Walnut from which we might get the inspiration for the same type of closing although I’m using a different one here. 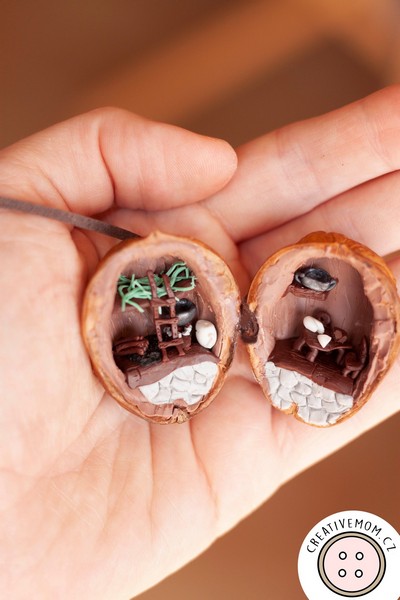 Optionally also if you want to use the metal hinge for closing instead of the leather thread:

House of Heidi (Miniature in a Walnut) Tutorial 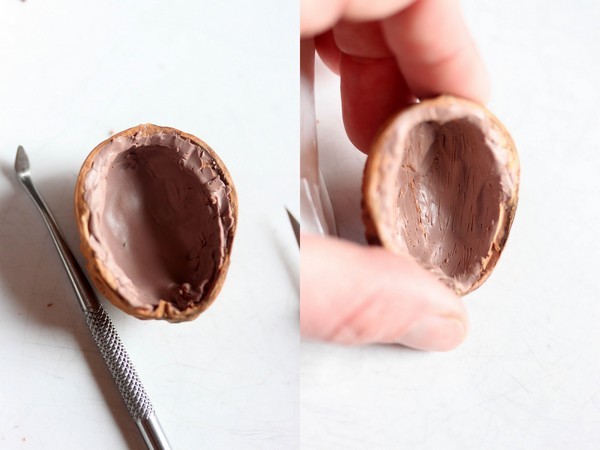 If you want to use a metal hinge for closing instead the leather thread I’m using, follow the steps here and then come back to this step. If you use the hinge, you’ll attach it first and then work with the two halves of the walnut connected. I am going to work on them separately and then join them with the thread.

First I rolled out a very thin layer of medium brown and pressed it carefully on the inside walls of the walnut. I trimmed the excess and then used a scalped to make scratches all over the surface of the clay layer to imitate wood. 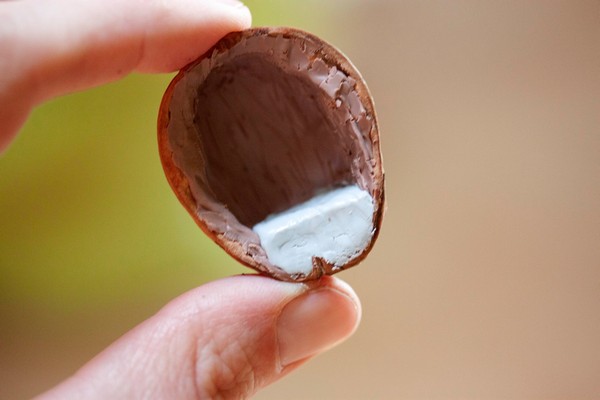 I pressed a piece of gray clay to the bottom of both halves and made it nice and even. I made sure it wasn’t thicker than the walnut so the walnut could still close. 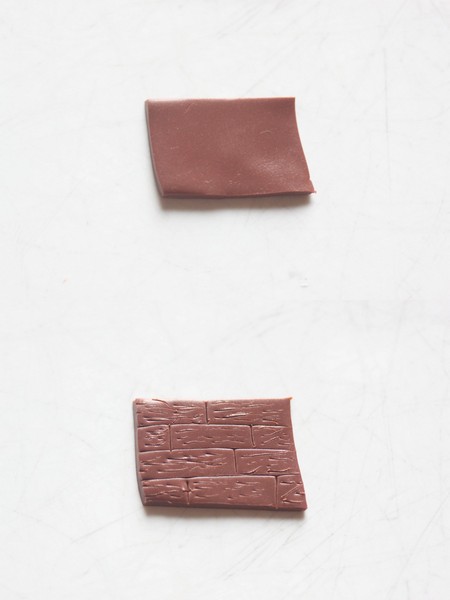 Then I rolled out some dark brown and cut two rectangles that would more or less cover the grey part. With the scalpel I traced what looks like pieces of wooden boards. 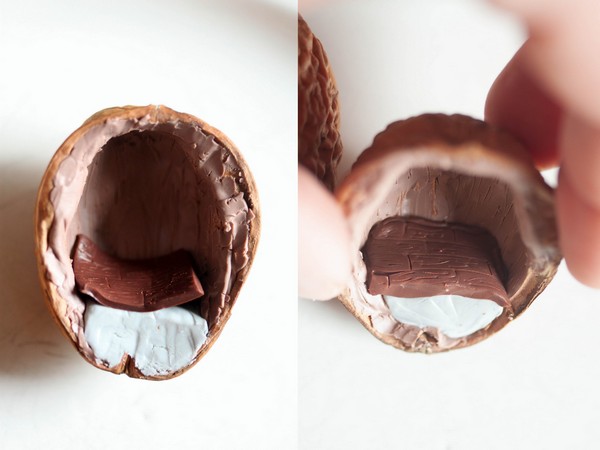 I placed the wooden floor on the grey clay and adjusted it with a flat tool to cover the whole top of the grey piece. 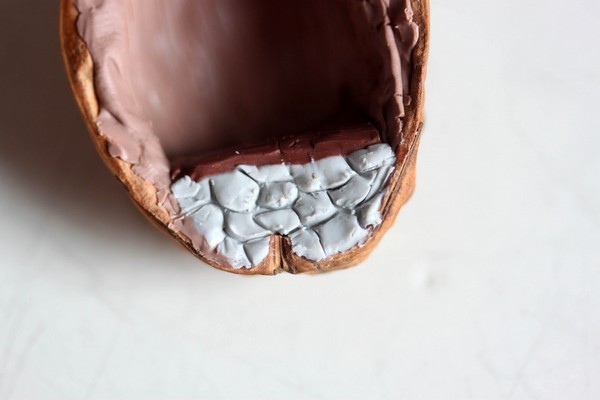 Then I used the scalpel again to make the stone-like texture. First, I just traced where the stones would be, then I cut a little deeper and in the end I made the indentations wider with another tool that is small and this but not sharp. 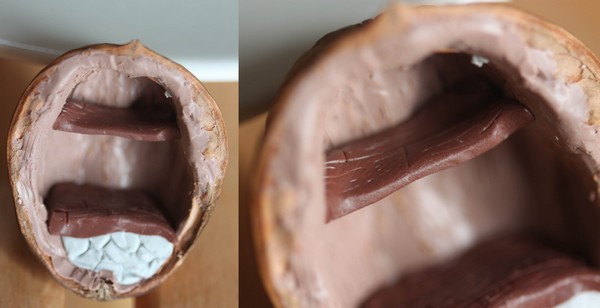 As last thing before the first baking I cut one more “wooden” piece, gave it the wood texture and placed it in one of the halves as a shelf. Since the clay on the walls isn’t baked yet the shelf will stick nicely to it but it’s still good to use a tiny spatula to kind of press the edges of the shelf into the walls.

Bake according to the instructions for the polymer clay type you’re using, in my case (Cernit) it’s 30 minutes on 120 °C

Now is the time to prepare the polymer clay glue. It’s better to bake parts of the work and then glue more parts to it (the glue still needs to get baked) because if you do everything at once and then bake, it’s still possible but it’s much more difficult. You need parts of the clay to be solid to attach other parts to it and if they’re still unbaked, they might get deformed while you work. 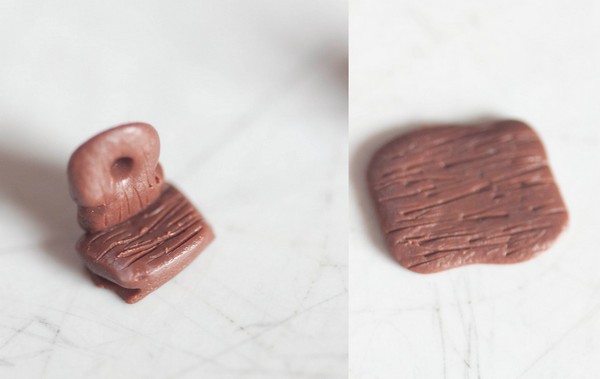 So for the chairs and table I first cut the board, about 1 x 1 cm for the table and 0,5 x 0,3 cm for the chairs (there will be two chairs, remember when Grandpa decided to keep Heidi and made her a chair?) I scratched the boards to make them the texture of wood. For the chairs I also formed the backrest which is basically just a piece of clay molded in my hands and then I pinched a hole in the upper part because that’s what the movie chairs have. I placed the backrest perpendicularly on one edge of the chair seat. 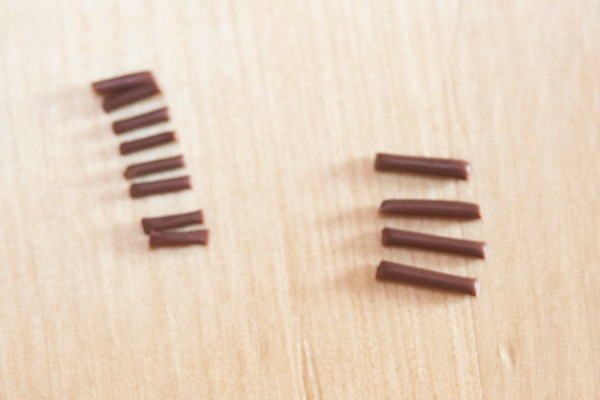 I made 4 longer legs for the table and 8 shorter for the chairs, it’s just rolled out dark brown clay.

I baked all the pieces, then glued the legs to the table and chairs and baked again.

Grandpa has a large fire stove in the house, I couldn’t make it quite as large but it’s a stove anyway. 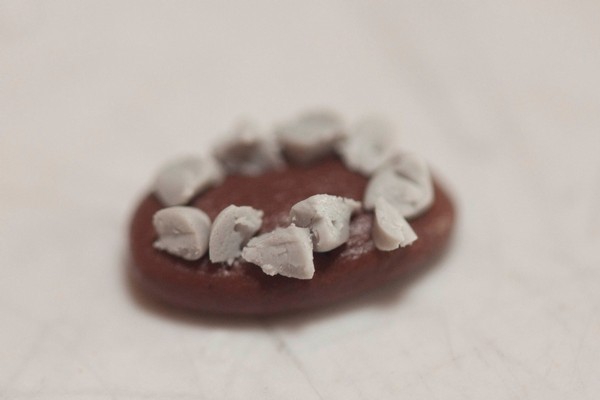 I molded some dark brown clay in my hands into an oval shape, then cut tiny pieces of grey clay and placed them in a circle on the oval like stones. 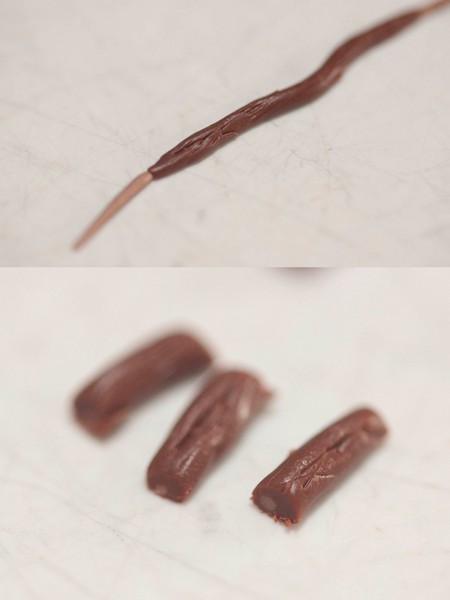 I rolled out some dark brown into a thin layer, then placed a light brown long stipe on it and rolled it in. I rolled the whole shape to be long and very thin (about 1 mm) and then cut it into 8mm-long wooden logs. When you cut them you’ll see that the center of the logs is lighter. 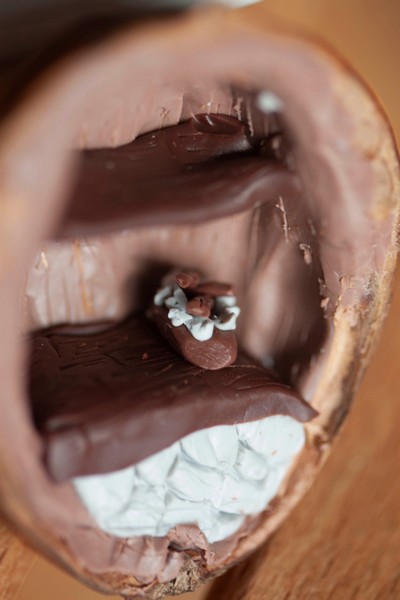 I placed (glued) the stove to the wall of the walnut half with the shelf. 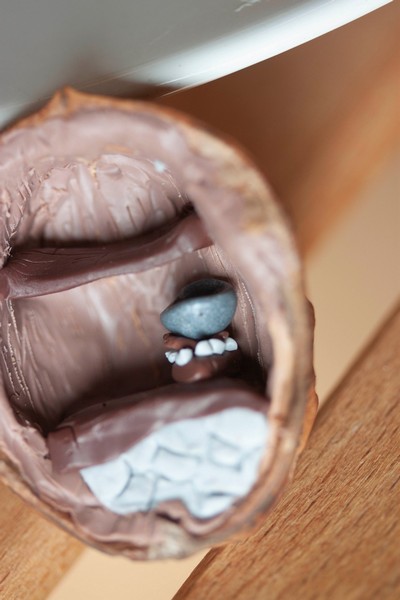 Then I just molded a tiny bowl from metallic black and placed it on the wood, it’s a cauldron for cooking. 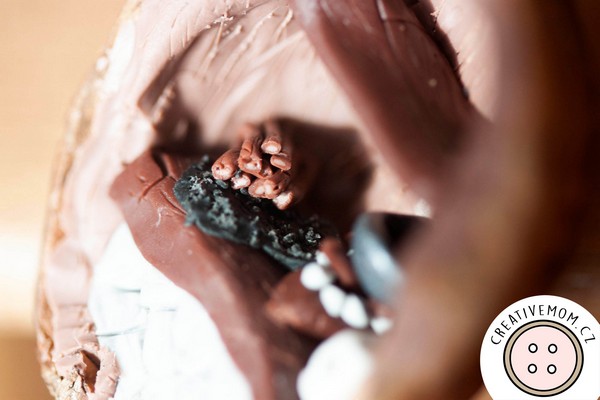 Grandpa has several furs in the house so I made one from a piece of black clay which I pinched with tiny manicure scissors to make it look like fluffy fur. I placed it next to the stone and made some more logs which I placed partially on the fur. I baked the whole thing at this point.

As you probably know, Heidi didn’t really have a room, she slept upstairs where the hay was kept (and she loved it). And that’s what the shelf is for, it’s actually rather the floor of the granary. 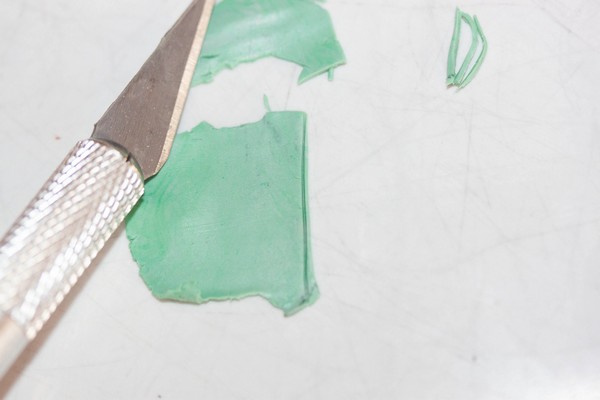 I rolled some very light green very very thin and used the scalpel to cut the thinnest stripes I could cut to make them resemble hay straws. 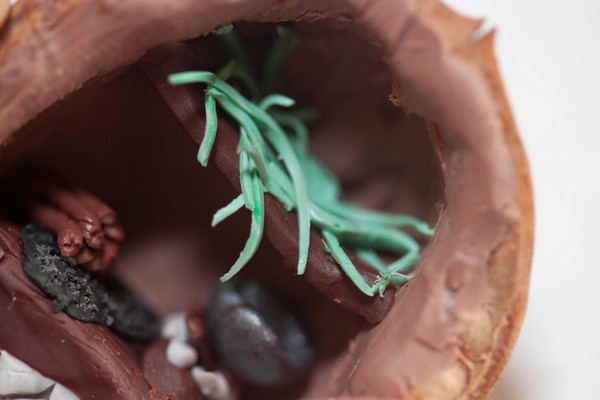 I placed them on the floor in a messy way. 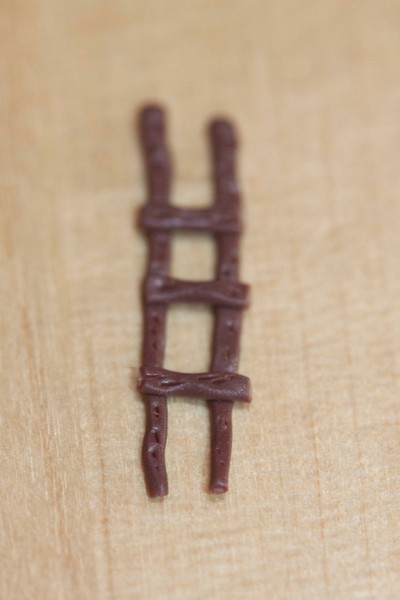 I made a ladder from tiny striped of dark brown clay and gave them the wooden texture. 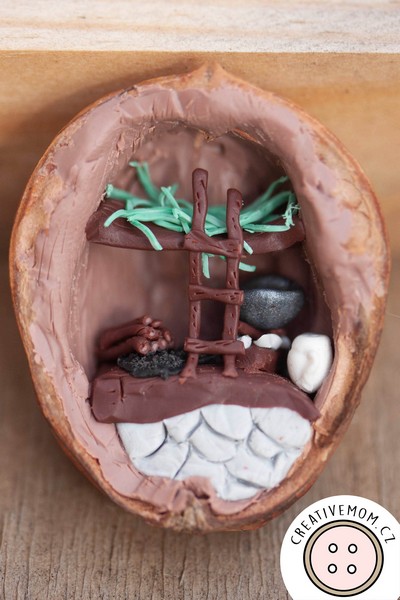 Then I placed the ladder in a way that it would lean on the floor and Heidi could go upstairs to her “room”.

Heidi often drinks goat milk and grandpa has several pitchers in the kitchen, so I made a white one which is just oval shape molded by hand. 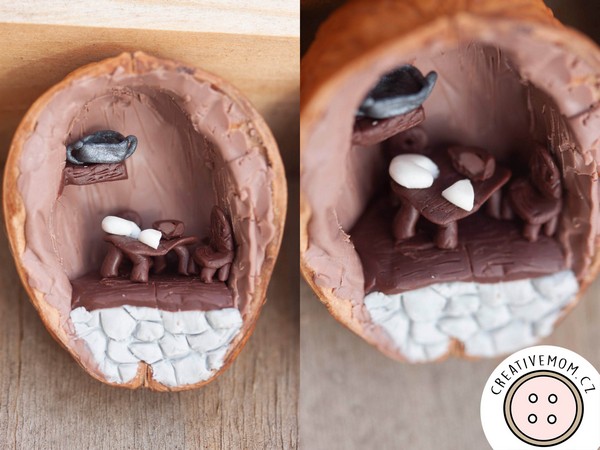 I placed the table and chairs in the other half and made also another small shelf with a pot on it (just molded in my hands).

Heidi and Grandpa also eat goat cheese and bread so these two things have to be on the table. The cheese it a round ball pressed between my fingers and then I cut off a triangle of it and placed both on the table.

I made the bread the same way I made the logs – I rolled out some dark brown but this time I placed a light brown ball on it and rolled everything in as a ball. Then I cut off a slice of the loaf so the lighter inside was visible. You can really see the soft inside of the bread and the crust.

And then followed the last baking. 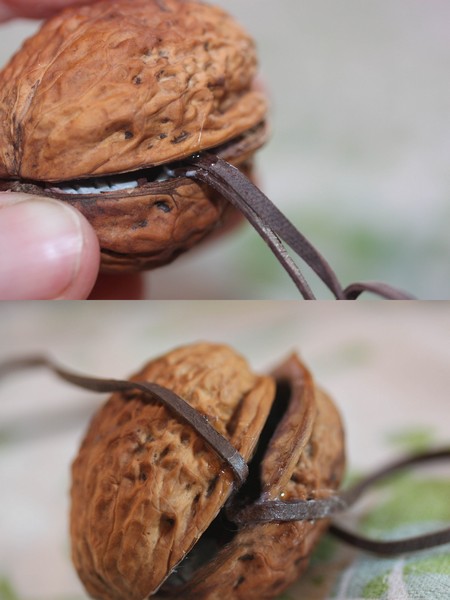 I used epoxy glue to glue the leather thread on the back of the walnut halves. I folded the thread in half, put a drop of glue on the edge of each walnut half and pressed the thread between the halves where the glue is.

When it was dry I also glued it a bit more on the back of the walnut halves.

And that’s it, now the walnut can be closed with a bow and wait for whoever opens it and wonders what’s inside. 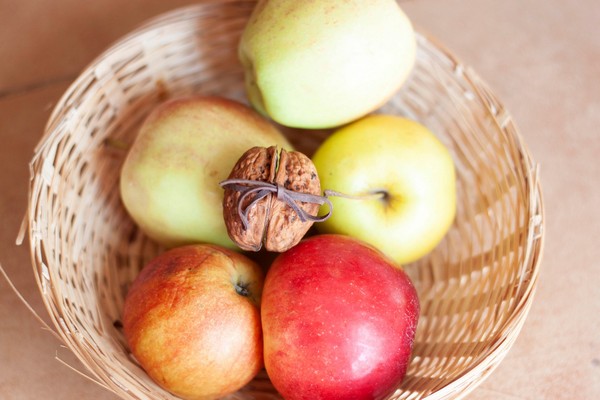 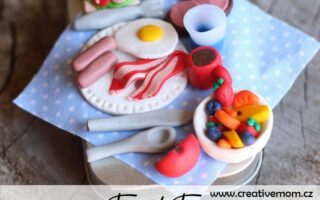 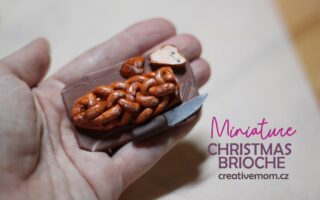 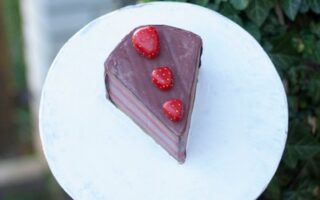